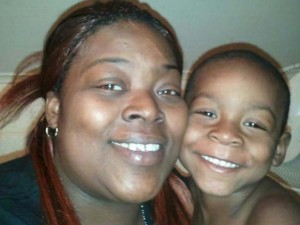 Terrell Mayes, Jr.  I didn't know him; but I can't forget him. Three months have passed since
Terrell Mayes,  Jr. was shot in his north Minneapolis home in as his older brother led him to a closet for protection.

What caught my heart, what haunts me, is this was a practiced-drill taught by a caring mother. But on Dec. 26, 2011, it wasn't enough.  A bullet found this beautiful child, despite the safety plan of Marsha Terrell. It was determined --a random bullet took Terrell's life.  He was just starting to talk.

When I first heard this story on the news, I was struck by this drill that was in place for the safety of all Marsha Terrell's children. No one should need such a plan. But on the 2600 block of Colfax Ave. North in Minneapolis, the reality was different than in the neighborhood my son had lived. Somehow injustice was all around. And violence, guns with no end and no aim...that still found a precious boy with a dazzling smile.

What if we were all doing this drill that Marsha Ferrell had in place for her children? It's a chilling thought.  But three months ago, it was a chilling, deadly day.

Now the CrimeStopper fund for Terrell is over $10,000. Still no one has come forward. I've just donated in honor of Terrell Mayes, Jr. I know justice doesn't always come. But I pray it will this time. Perhaps we can make a difference.

Five CrimeStopper billboards are now in place in Minneapolis.

Posted by Writer in Residence at 10:33 AM