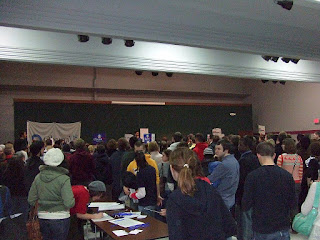 This is a true story of the Iowa caucus in the gymnasium we all saw on election night.

Mary, not her true name, had various duties assigned to her in support of Hillary Clinton's campaign.

She was asked to bring sandwiches and water for 250 people.

Prior to caucus night, Mary called the principal and asked to reserve a particular corner in the gym. She was given the instructions that all would have to wait until the basketball game was finished before gathering on the floor.

The Sanders caucus members ignored that guideline and gathered on the floor before the game was over. Mary went up to them and told them she had reserved the corner they were occupying.

"Do you really care," was the response?  Mary refused to defer and insisted she did indeed care. She prevailed.

She had a tussel with yet another Sanders volunteer who said: "I'm going to steal one of these bottles of water."

A high school math teacher was asked to be in charge of the numbers. The Bernie people were throwing their names into a hat. But they had 73 more votes in the hat than the number who had signed the register. The teacher got them to recount and take off the 73 people who weren't there.

Granted it's a microcosm of the Iowa caucus, but I know it's a true one.

According to Mary, Ed (the math teacher) attended a democratic caucus meeting to discuss improvements. The man in charge of their caucus said he had heard from a Bernie supporter that Bernie people were definitely stuffing the ballot box.

Mary was glad they got a recount but she wondered about the other caucus groups.

She indicated many attendees, often times were young men who had never caucused before. Some became overly aggressive.

There was a problem knowing the sheer number who would show up.  Generally the numbers fall way below the 900 she said came to some precincts.

Let's support our candidates and VOTE!