It All Started with a Ball of Yarn 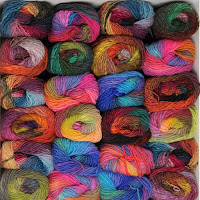 "I've never met an alien, but I have met an extraterrestrial." Dan Burisch, microbiologist


It all started innocently enough, listening to a speaker (I knew not who) answer questions I've long wanted to know. I asked Google, a bit like asking God--what is the truth about Roswell, New Mexico?

Up popped some images. There stood a stately gentlemen saying he grew up in the area and decided to ask the Roswell community what happened.

This is where my ball of yarn bounced off my lap.

I learned the man speaking without superlatives, was Dr. Edgar D. Mitchell, former Apollo 14 astronaut who journeyed to the moon in 1971. I began to read about a man who possessed both integrity and brilliance. Mitchell writes of experiencing what the Hindu's call samadhi, the mystical awareness that everything is one, as his space craft returned to earth from all it's splendor in space.

He came home changed and spent the rest of his life studying consciousness, founding the Institute of Noetic Sciences.

I read about this man, ordered three books, and was a bit saddened that I had missed his life! He died three weeks before I heard his voice. Yet I felt honored and thrilled to learn about his incredible intellect and his achievements.

With plain speaking, Edgar Mitchell told of listening to the towns-people describe small coffins delivered to the crash site at Roswell. The early headlines of a flying saucer having crash landed near the White Sands Missile testing grounds--was quickly changed. The story became a weather balloon, not a flying saucer, had landed. I never quite believed it.

In reality several extraterrestrials had died, but one lived. And Everyone was sworn to secrecy.

What a long time to smother the truth--was my first reaction. If we round the number off--it's been approximately 70 years of being in the dark. We can say secrecy, to some extent, has been maintained.

Over the years many have sought to learn the truth, thankfully learning from whistleblowers and their own research.

I've read, searched, and followed the threads. They led me to what transpired at the close of WWII with both our government & the Russians wishing to covet the technology the Germans secretly had of black, saucer-shaped aircraft, (and more) along with the minds that created this technology. Operation Paperclip was launched--the project to attract the best minds for the United States. The names included Wernher von Braun, Ludwig Roth, and Arthur Rudolph. (On Wikipedia, you can have the faces below magnified and identified.)

There were times, I became overwhelmed and shut down completely. I"ve remained seeped in narrations: the stunning reveals of whistleblowers. They are blowing whistles for a reason, even when their life and family are threatened.

A lot can happen when you stumble following a ball of yard around.

At this writing, with all the stunning images and words from the whistleblowers, I've had great concerns. This area of total secrecy can use it's people, putting many in an ethical box of non-disclosure and fear.

So many have given decades to this closed system. Bob Lazar, space scientist felt he lived in two centuries: the 19th and 20th. Finally despite threats, he left. Frequently you are punished by having all your career data wiped off the planet. Lazar panicked as he worried even is birth certificate had been deleted. His truth was undermined by his entire educational and scientific employment record destroyed. (Even now on wikipedia, one can see how is scientific background was destroyed. It is chilling. I seriously doubt darker charges against him. He spoke, he left--no mercy for you.)

Others have lost their retirement of 30 + years and pension, forced to live in poverty,

I've spent first weeks, then months reading on what has felt like true paths, occasional detours, and dead ends. But the truth rings true. Researchers are seeking and have sought to verify as much as they can. Most whistleblowers are true heroes.

I am fearful of what our "shadow government" has become. If we don't have allegiance to the people, or to simply the truth, are we a democracy at all? I've listened to a former CIA member close to death. I learned Area 51 and 51s4--were off-limits, housing spaceships of aliens having come to earth. Repeatedly I read President Eisenhower met with aliens in California (on the pretext of a having a dental appointment to fix a tooth) asking groups of aliens for their technology.

Scientists, military personale, & business people were part of the group who met with the extraterrestials. (There is a documentation of that meeting and reaction one attendee felt.) The initial contact with extraterrestrials was made through mental telepathy.

It's fascinating to hear that some extraterrestrials refused to agree to the demands, telling the group we lacked the ability to handle more sophisticated technology because we were not devoted to peace--but to war.

The Nordics, it's said, refused to comply with our demands. But those that agreed--wanted something in return. The extraterrestrials called Grays wanted to study our bodies and abduct just a limited number of us. So the agreement was made--according to online sources, and we got help with the technology we asked for.

But it's said the Grays were dishonest and huge numbers were abducted. I imagine, this is one of the truths they don't want revealed. Two sources have said the technology is fifty years ahead of where "the general public," thinks it is.

The consequences to whistleblowers speaking out are threats, intimidation and death. It is frightening to contemplate--in this darkness, just WHO is accountable? Where are the moral leaders? Where are the women? It's been said we're as sick as we are secret.

There is a secret group (of essentially white males) from the military, scientific & industrial communities making far-reaching decisions for us and the world.

Gardner was asked about one warmongering, former office holder, and he shook his head.

"Not nice," he said and told about this individual walking away from Area 51-s4 with a patch of skin from one of the EBE who was more a space-time traveler: 15 light-years ahead of us. A being from earth--us! His name was J-Rod (who crashed with several other beings in 1953), and was held captive for over 50 years. He came for help with his genome as he had a disease known as neuropathy that is troubling his community.

Those who tended to him called him names--totally lacking the awareness that the enlightened being was quantum leaps ahead of where we are on earth.

It's told peace-minded extraterrestials have disarmed multiple missile tests around the world--in an attempt to keep us from blowing the planet and each other apart.

Yet we still want to make sure we can obliterate enemy extraterrestrials should they threaten us. It's pretty disgraceful that evolved, benign extraterrestrial beings off our planet are wiser than the war-dedicated leaders hidden in the dark. (Take another look at 9/11--perhaps start with Building 7.)

*Ron Gardner, who has now passed away, said the future can be seen with some of this technology which I have also read. He said Hitler worked with extraterrestials and got his idea of an Aryan nation from them as well as technology. This fits. (You'll be amazed to see the black flying the Germans had developed.)

If we want to avoid catastrophe, said Gardner, who practiced Transcendental Meditation TM, we need to be more spiritual, focused on helping each other, vs the principles of war and destruction.

Exposure with the truth, Gardner said, can take us away from leaning toward World War III to a distinctly different world view. "Extraterrestrials are not happy with us."

Per Ron Gardner--our agreements with extraterrestrials demand that the truth is shared with the public. Gardner felt John Podesta, campaign chair for the Hillary Clinton campaign, is pushing for it to happen.

"The military-industrial complex is in control big time." Ron Gardner
"We can have all the water we want, all the electricity we want, but the cabal is in control."

The Citizens Series on Disclosure was produced by Ron Gardner.
See www.citizenhearing.org

I pray more expansively now. I ask the Communion of Saints to help us and good extraterrestrials to intervene to the extent they can. I'm also turning activist.

We have to end the darkness. People--YOU--are infinitely more loving and wondrous that the malevolent greed and control-minded group/s bent on war and our destruction.

Posted by Writer in Residence at 11:55 AM