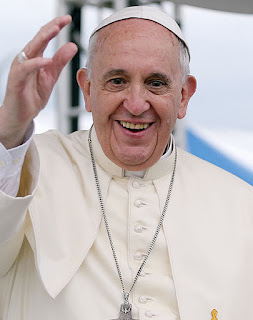 Pope Francis is a comforter, a teacher, a Model of Mercy. This is what he wants for us in our own interaction with the world.

It has been impossible for me to watch several days of Pope Francis' trip to the United States with a dry eye. Indeed, I have wept twice.

Though I have issues with the Church of my youth--who, who cannot be taken with the compassion of this man?

As we've witnessed Pope Francis weave through his incredible days here---there the little ones are, at rest and waiting, with their devoted parents, those with special and debilitating diseases and handicaps in the hopes Francis might, just might stop and touch their heads and hearts.

All the youth the Pope has touched are actually not victims though the Church has the term "victim saints," and they may well be on that road of grace.
Here is the truth that turns everything on its head.

What I would lift the parents with is the knowledge that:
We choose our parents and siblings and thus time and place on the soul level before we arrive here.

Therefore, these beyond challenged children the Pope has blessed and kissed are on a holy mission. They have accepted, they have chosen--a limited body for all the lessons they will experience within it.

One can certainly grasp that our spiritual evolution or theirs would be sped by such a life of sacrifice.

The Pope keeps highlighting those of us without, those of us "on the margins," forgotten, hungry and in need of outstretched arms. As a simple yet complex man of grace, Francis models how to live Christ in the world.

We can ignite our own lives by observing, by seeing, his flame: visiting the incarcerated, seeing the elderly, reaching to console the homeless, and honoring peace and foregiveness within our own families.

At first I cried when Francis entered St. Patrick's in New York City. Just one of my thoughts was: He may never come again. We simply don't know. So every moment is precious and never to be repeated.

A goal I have is to read through all St. Francis' speeches at each venue. I want to wrap myself in his illuminated words. This Pope is a gift for our times. The Catholic Church has been in such a spiritual black hole. And then up pops Francis, having his own darker days when he was forced into seclusion by his own Jesuits.

Yet everything he has endured on his path to the Papacy, though he never sought it, has become who he is today.

I have prayed to my "Heavy Hitter" Saints to protect Pope Francis and allow him to Be With Us...modeling mercy, transforming souls.