Pray, Who Is Missing? 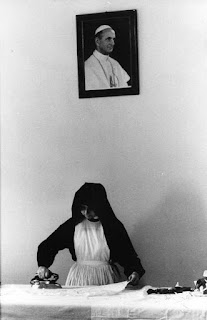 The roll of men in the Catholic Church is so broad, so inclusive of them, of patriarchy, that it seems those in power are unable to see the half of us that are missing.

I'll never forget Pope John Paul II's funeral. By the time all the Cardinals paraded out, esteemed priests, deacons, and altar men or boys, the view was so overwhelmingly male (draped in red and white) that it was stunning. The scene was a sea of red matching the slippers the departed Pope wore on his feet.

I took notes on the first Mass said while the Pope was in the United States. We had a female soloist, one woman reading a responsorial psalm, a choir with women--but not on the altar.

Even the beloved Virgin Mary was off to the side. The image of the nun above is such a striking pose which depicted the times--but for women, the crux has not changed. Maureen Down is right. The Church protects the old guard.

This is the unanswered issue of our times. Essentially women are still ironing vestments in the basement of the Vatican. Even now the Catholic Church nearest to me, Mary Mother of the Church (coined Mary Mother of the Mortgage by a nun ) decided, no, little girls could NOT serve at the Mass: a fact which saddened even traditional women in the parish.

I have listened to MSNBC'S Chris Matthews say that here in the States and elsewhere, it is women who are aware of the school setting, who is teaching, what the needs of the children are, along with the needs/& care of the home. Some of these same women, of course, have their own careers.

Years ago I said the Church will turn to women when they run out of men. I was wrong. Even in listening to comments the night before the Pope departed, I heard very closed minds about women in the Church--one of them being a bishop. The resistance regarding women as equals seems so monumentally foreign to the patriarchy that they can't even engage about it. So it's double-speak. They can't connect in meaningful ways.

We are told all the roles women are playing in the Church today. But the laity isn't seeing it. It seems we can be close to missionaries to Guatemala or Haiti, but heaven help us, we cannot be a deacon or say Mass. Years ago at St. Joan of Arc in Minneapolis, a deacon introduced his wife, who was allowed to become a deacon only because he was.

He said, "You will hear how profoundly more eloquent and able she is than I."

She was given a standing ovation.

I am now grasping once again, why my former teacher and mentor in grades 6-8th grades, so Italian her father and uncle were from Italy--has left the Church.

When John Paul II said he didn't want "cafeteria Catholics," it angered my brilliant friend. She left the Church and is now a Episcopal Eucharist minister. She has even stood in white robes near stairs to the subway train and administered ashes on Ash Wednesday. It's an insult to offer a women with a Ph.D. anything but equality.

She hopes she will see inclusion and family planning in her lifetime in the Catholic Church. Now I'm pondering if I'll see it.

And it isn't as if celibacy, hierarchy, patriarchy and secrecy have been a resounding success.

I'm always praying that someone opens the windows! Airs the place out! Is magnanimous to all: Welcome everyone! There are women giants who have the calling, the brilliance and grace to serve the Church in outstanding ways.

I am pulling for Pope Francis, but I am painfully aware--he is but two years short of 80 years of age.

A Franciscan Laity group I saw pictured in Rome within the last two years--were predominantly gray, or capped with white hair.  Young, educated, Hispanic women aren't attending the Church of their mothers.

Recently a dear friend who has served her Church for decades in major ways asked herself: What has the Church done for me?

Posted by Writer in Residence at 9:24 PM