Our Stories of Love 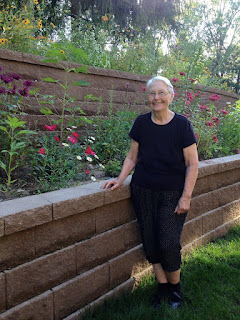 "Our personal stories of loss
Are really our stories of love;
If we hadn't had our years
of love and bonding,
If the riches weren't there...
How could our tears fall over our warmed hearts?

Truly loss is a cycle of love within life."

When I moved into what was my father's condominium, I wasn't fixated on my new neighbors because I was healing from a near-fatal car accident.

But when I did take in my fellow residents, I felt far younger than most who lived here. I was startled to see so many walkers and canes. But that has been changing. With so many long-time residents having lived at Woodhurst West for decades, one by one they begin, or continue to, "fly up."

I realize it's the flow of life, but I've never had it so under my nose, or down the hall but a few yards, or cross the hall by a few feet.

Angels have been active...all around me. In a previous post, I wrote about My Saints in the Corner: Joyce and Ed Stevens who spent a life in the ministry. When we lost them...I was so hit by the grace of who they were, and who they still are, that I memorized their favorite scripture and saved their memorials.

Then the escorting angels moved one door to the right. My neighbor Frank in precarious health: COPD, conjestive heart failure, diabetes and more went to the hospital. Then he was diagnosed with cancer, entering hospice shortly thereafter. His journey was lovingly managed right where he and his wife Joan have lived right next to the Stevens. And right next to me.

At the family funeral for Frank, I saw all the pictures of he and his wife Joan's pictures from their wedding and dear posing at Niagra Falls. For the first time, I saw Frank as a younger man. I stood and stood by their honeymoon faces. I could see the noses and the chins, the soft smiles. I saw Frank's life in its entirety.

It seemed only weeks ago I had delivered chicken soup from Valley Natural Foods and witnessed changes in trust documents, signing my name on various pages in their home.

I got holy water from Lourdes from the closest Catholic shop and prayed my heart out; but the miracles were not to be.

Then the escorting angels moved onto the next door where our master gardener, Lou, lives, my dear friend. I tried to do "distance healing" for her. I focused so hard on her lymph nodes and total healing. I admit I was crushed when the report following her round of chemo treatments wasn't good. I felt I had failed.

Lou is battling pancreatic cancer; and I've been devastated to see her suffering and her face becoming so pale. I slip notes and cards under her door from "Connie Across-the-Hall." Now that's what she calls me: Connie Across the Hall.

So you can see, if I needed to learn about letting go...I'm in a perfect place for it.

A cousin in-law told me after our beloved family healer flew up, You don't want people to die.

I said: I wouldn't go that far. Secretly I know he's right. It's more that I feel, well, not so soon. Later.

Last summer Lou managed the huge project of contractors removing our rotting, wooden logs that supported our retaining wall. Stone was voted on and with her brother's master garden in California in her head, Lou and other gardeners mapped out a flowering field at the summit of our hill and all the flowers potted behind our pool. It's a huge span of flowers.

We never dreamt last summer when Lou put in hour upon hour on the hill digging, planting that she'd be moving on to other gardens so soon.

She is in transition now. I'm trying desperately to find quotes and images to lift her. Yesterday I slipped a postcard from the Minneapolis Institute of Art under her door. It was a painting of the Christ taken down from the cross. I had been saving it.

Stupidly I said: This is our ace in the hole, Lou: a treasure that must be shared. Put it on your pillow.

I know how deep her faith. I was hoping to lift her past her pain.

Two weeks ago, I called 911 after another neighbor banged on my door. She nearly or did collapse in my arms. She said I'm so dizzy; could this be the flu? She was perspiring heavily, getting sick in the hall. I grabbed a metal planter inside my door to help her. Then I called for help. Her blood pressure was at 200.

Molly went off her medications from a decade ago because she couldn't afford her medications. After a night in the hospital after which I picked her up, she said: Now don't worry about me.

As I type, two doors down, Bill, brilliant, old and bent over, is in the hospital. Joan, mentioned above, knocked at my door with Bill's wife Ann (who has dementia) saying Bill was in the hospital with a blood clot and cellulities. I hugged them both...precious elderly.

I never knew how sweet Ann was until I hugged her. Why did it take me so long?

Posted by Writer in Residence at 11:02 AM