Other Christs - Growing Up in Christ Consciousness 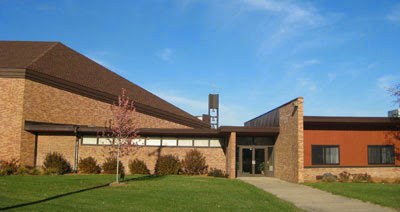 In recent weeks I've been reading about Christ Consciousness. In reading I have been lifted, but I have also found in researching the term, memories of my early years of Catholic education coming to mind.

I can remember being in the church of St. Richard's in Richfield, MN (a Minneapolis suburb) and being taught that each of us, each of us, was "another Christ."

This left a powerful imprint on my mind...an imprint that is still there. In the 1950's and early '60's, our school experience was profoundly religious. In those days, there was daily Mass, religion class, and later a St. Richard's Breviary prayer meditation which took place three times a day. In the monastic language prayers were termed the Divine Office. As children we said prayers in the morning: Terce; mid-day, Sext; and None, mid-afternoon.

When I look at my prayer book now...the psalms and readings are so familiar that each is like visiting an old friend. Part of my soul and bones reawaken with each word and phrase.

Being taught that all those students around me, and even some teachers I didn't like, well, we were all "Other Christs." It was a reverential teaching for a serious little girl who was God centered, I believe, even then.

I worked with a woman of another faith but also a personality not to be denied. I had to work hard on telling myself that Virginia was Another Christ. I looked for the good in her, and of course, I found it.

When I left the job, Virginia had a gift for me, a small book on friendship: A Friend Is Someone Who Likes You by Joan Walsh Anglund, which had wide popularity at the time. Virginia wrote in it which meant a lot to me.

Now I know or believe that Christ Consciousness can have other names. Whether Buddha Consciousness, the Over Soul, Higher Consciousness, Allah, Holy Spirit, Brahman, Collective Unconscious, or Great Spirit...we are all united under God.

What was old is new again or what was old was never old, but timelessly true, for all eternity.


Posted by Writer in Residence at 7:40 PM