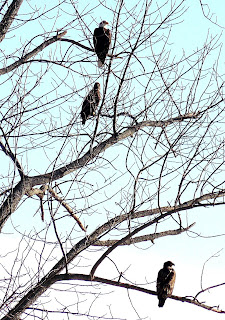 Easter came early or maybe we went looking for it. Today it could be seen, could be felt
along the Mississippi River in Red Wing and Wabasha.

Beneath the bluffs on route to Red Wing we left the urban complexities behind
and looked at mauve and taupe trees on hillsides and bluffs we wanted to embrace.

Hearing the weather was going to be less desirable for an outing tomorrow, we sought
the beauty of Lake Pepin today.

At first the "lake" was shrouded in a bluish gray under an overcast sky. But then the sun
lifted everything and the shadows, the brilliance of the frozen river, held us captive.
My friend and I talked to a bartender who found his spot overlooking the river and there has stayed for nine years. He'll never have an office view so wondrous--and he knows it.

I think my friend was once a Native American. She spotted the eagles and osprey,
hawks, and barn swallows that to me are so fluid in flight.

No one picked today to seek the river out. So it was ours. On the one hand there was still
snow that has it's own unmarked beauty, and on the other, spring was also near.
It was like winter and spring were holding hands.

Fifty seagulls had a family reunion on a block of ice and road the river.

"Do you think they know they're moving?"

Once an eagle was pointed out for me, I couldn't let it go. I kept watching it sitting on a branch of a tree near the open water. We saw more eagles higher in the sky, but they had a mission they weren't sharing.

We had a feast but it wasn't table food; it was the soul food of nature.

We topped off the day by finding Serendipity Co-Op Art Gallery. I scooped up wondrous photos of perhaps the last healthy moose in MN, Split Rock Light House with the sun reflecting off it's windows in a God-wave, geese with goslings, and sailboats set against sunsets.

Aren't we always looking for redemption? We draw inspiration from an altar, a belief,
and rejoice in the saga of early spring finding God was there--all along. What a prayer.
Posted by Writer in Residence at 10:30 PM