Stephen Hawking - Here and the Hereafter 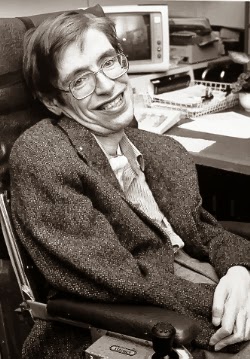 
I so wanted to watch the PBS special on Stephen Hawking. I did catch the broadcast but almost missed it. As it was, I tuned in about ten-15 minutes into this superb documentary.

I was transfixed watching this brilliant man tested by a body increasingly impacted by a motor neuron disease related to amyotrophic lateral sclerosis (ALS), a condition that has progressed over the years. His persistence and sheer grit to triumph despite his handicaps is now legendary. And thankfully he is with us still!

As a poet I obviously don't have his mind that has changed how people see the universe. But I am most intrigued & fascinated in the quotes I see of Stephen's thoughts on the afterlife.

"I regard the brain as a computer which will stop working when its components fail. There is no heaven or afterlife for broken down computers; that is a fairy story for people afraid of the dark," he said in an interview which ran in The Guardian May 15, 2011.

There is, however, quite a bit of documentation now about the soul level before we come to Earth taped in past-life regressions and after-death communication (ADC),

Years ago I learned in a business women's group (most of whom were in the counseling field) that we choose our parents. Stunned I asked two women about it again as the room emptied out. They each nodded yes to my question and looked at me as if I had been living under a rock.

I had to go home and chew on that one! However Carol Bowman, who has written about children and past lives, narrates a true story of a child telling his mother that he picked her and his father when they were on a beach near a pink hotel. And the truth is, his parents honeymooned in Maui near a “pink” hotel.  He was born nine months later.

Authors Judy and Jim Guggenheim in Hello From Heaven, attest that one needn’t believe in heaven to get there! As many who didn’t believe have communicated to the living: I was wrong about not believing in the afterlife.

I see parallels between Stephen Hawking's incredible life and his choosing the life he has on the soul level. It is inconceivable that Stephen would choose his parents yet not know of the profound handicap he would be met with as a young man. Choosing a life this arduous sets in place deeper spiritual growth and development were he not in a body limited by a degenerative disease.

Thus while Stephen has profound accomplishments in his life as a theoretical physicist and cosmologist, he has also chosen to deepen his spiritual progression at the same time. The fact that he doesn’t remember his commitment on the soul level doesn’t matter.

Stephen’s belief that heaven isn’t a fairy tale will be wondrously disproved to him, as he embraces (one day) what he’s always known as a soul going home.
Posted by Writer in Residence at 7:57 PM