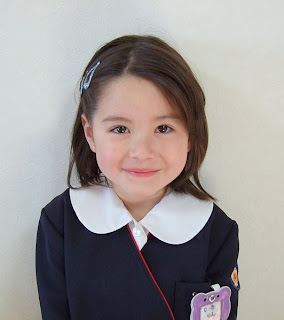 Even after only two weeks in Japan, it's been an adjustment coming back to the States.
I literally looked up white gloves when I got home, wishing I still had some. I was comforted
that they are still available.

In Tokyo I saw young girls in navy uniforms with wide brim hats on one of my sojourns. They took my breath away. So much so, I failed to get the picture I wanted, I was too transfixed. There must have been eight or so who descended a staircase to the train, and I was--too late.

The first shock coming back was landing at Chicago's O'Hare airport. An attendant just stared at me and said: Next. She told me I was in the wrong line. I apologized. No one bowed, no white gloves.

In fact the young man in security was most abrupt, touching his chest after moving me along with great haste.

"Maybe he has indigestion," I said myself, trying to give him a pass.

When I got to my gate in Chicago, I was stunned. The passengers looked as disheveled as the seating was decrepit. The chairs should have been removed five years ago: the metal was chipped and unsightly. No one was well dressed. It was a motley crew, and definitely not the rock group.

I ran to the grocery store late tonight; it was almost empty. I nearly had to enter the freezer to find what I wanted, finding the product only after moving what was in front of it.
One lone clerk was standing ready to check you out. So many were forced
to check their own groceries. In Japan there are eight smiling faces in a row.

They bow so much in Tokyo that you bow back--with joy.

After grabbing my dilapidated cart I pushed my way to the parking lot. An attendant was collecting carts wearing his night-time orange vest as if he was hunting. Wordlessly
he took the two carts in the carrel and shoved everything along. Nary a bow. I
guess he was too young, cold, or tired to acknowledge another human nearby.

Driving home I decided I'd rather pay the $75.00 for the foundation make-up I forgot in exchange for the loving-kindness that went along with it.

Moreover I've vowed to clean up my act, get new shoes, get rid of my second-hand purple coat.

I saw a diamond ankle bracelet on a young woman as she walked the considerable distance to one of the shines in spike heels. A few wore traditional Japanese kimonos. No one was loud or beating their chest for attention. Most wore black coats, with their throngs of dark hair forming a sea under the majestic trees that formed a canopy on the walk. It was the New Year. People were there to show their respect in prayerful recognition at the Shinto shrine.

In contrast, my 6'5'' blond son walked with his fair-skinned daughter perched on his
shoulders, singing and swaying to a Wisconsin song they love.
It didn't fit, but it did.

I can't make the U.S. as polite as Japan. I can only seek to live graciously myself.
This I know. How lovely to be reminded of the simplicity of white gloves.
How softening to feel the respect we all so deeply deserve.
Posted by Writer in Residence at 10:01 PM