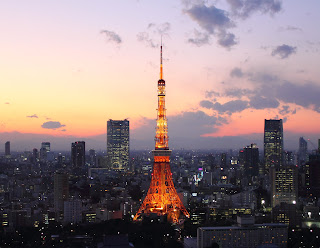 With a suddenness that still leaves me gasping, I'm booked for my long-awaited trip to Japan. It's a trip I've put off. Procrastination overtook my mind after hearing and learning of long flights over water, drop-dead jet lag, and concern about my weight and being forced to see Tokyo by foot. I saw myself panting behind my 18 month-old grandson.

I know I'm not in shape to climb steps to endless shrines, even though I should be. Do I fast until I get there? I was seeking a lean day yesterday, but then ended up eating too much Vigo red beans and rice (with cheap cheese from Costco).

A niece in Madison has a "Fit Pick" and is as fit as her pick. Yesterday I purchased the Weight Watcher tool that tracks your activity: I thought it would be a great motivator--or cattle prod! (Call it a motion detector for my _ _ _.)

My son said, "Mom, our apartment is just behind the tall building to the left of Tokyo Tower."

And there they've lived: dad, mom, and two blond offspring, leaning into Asian life as the Buddhists advise.

Kind residents have bowed to my 6'5" fair-framed son and my equally fair granddaughter. The tall and much shorter ex-pat have purchased French croissants at a bakery, and then sat on a bench. Passersby heard a little voice say: "On Wisconsin!"

I've howled upon seeing slender Japanese women kneel to get a shot of granddaughter Kjerstin like paparazzi encircling Madonna. My son explained to me that my granddaughter was seen as a pale, blond doll to her admirers. (Now that she's four, the paparazzi have dissipated.)

I've followed my son and daughter in-law's blog and seen what looks like a small octopus-like appetizer move onto a restaurant table when you put hot sauce on it. I've read signs and t-shirts with awkward phrasing since some shop owners want English on signs or shirts but aren't quite sure of their meaning. But since I know virtually no Japanese, they lead me linguistically.

I've admire how my son's family have studied the Japanese language, gone to festivals, and been invited to weddings. It's a morning ritual to hear my son call a cab in Japanese.  I hear "hai," but know it's not hi as we know it. More yes, okay, or hm. My daughter in-law discovered, too, that addresses on buildings don't relate to how we number buildings in the West, which left her in utter frustration.

I may be calmer today, but it is too early to say. I'm hopeful. After all, a poet in Tokyo can't be all bad.

With loving kindness my son informs me he's taking the first week off to be with me after I arrive. I tell him I'm a tuning fork. He counters with: I can help.

Easy Japanesey he says.
Posted by Writer in Residence at 6:25 AM