"Pray, hope, and don't worry."
"I can do more for you in heaven than I ever could on Earth." St. Padre Pio 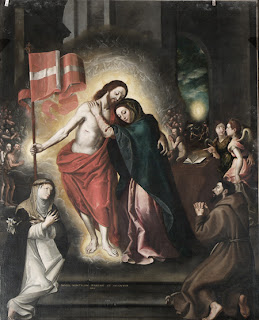 Thought to be:
Mystic Marriage of Christ and his Church

When a beloved high-school friend told me she had breast cancer, she learned about
my heavy-hitter Saints. From the onset of the disease through her radiation and beyond,
I became her prayer advocate.

At one point she said, you really should speak about them. She found my prayer life,
my inspiration from the lives of the Saints, and my prayers to them...strength-giving.

As a little girl in a parochial school, there wasn't a lot of money in the parish coffers for a great library. But we did have books on the Saints and martyrs on a bookshelf in the back of the room. My mother feared that between daily Mass, prayers the monks say three times a day from our St. Richard's Breviary, religion class, Lent with Stations of the Cross, visiting brothers or priests, and a swing-through by our pastor, Rev Alfred Longley, there was little else than religion.

But my introduction to the Saints began there. How to explain the Saints to a non-Catholic? Here is my simplistic explanation. I view these men and women as exemplary. And just as magnificent religious art can lift you to prayer and a vision of goodness and dedication to God, so too, the lives of the Saints as intercessors, guides, and protectors.

When we pray, when we ask the Saints to intercede for us, to me--it's a spiritual tug on the sleeve. And just as it works on Earth, I feel it must work in another dimension.

Learning more about the Saints as an adult gave both information and inspiration. The Catholic cable channel Eternal Word Television Network (EWTN) sometimes shows movies on the lives of the Churches' more prominent Saints.

Here is a list of My Heavy Hitters Saints - the list can vary, depending on the need of the supplicant.

One of my favorite heavy-hitter Saints is Italian Capuchin priest, St. Padre Pio. I read The True Story by C. Bernard Ruffin and was swept-up with this compelling narrative. St. Padre Pio wore the wounds of Christ on his hands and his body. Non-believers can say: well, the mind is an incredible thing, meaning his religious fervour manifest his wounds. However, Padre Pio bore the wounds for fifty years.

Pio also had the gift of bilocation: he was seen in two places at the same time. We all have days we wish we could be two places at once. But St. Padre Pio actually pulled it off! He also knew sins before they were confessed and corrected the confessor. (He really knew how long it had been since your last confession.)

The Pilgrim Statute of Our Lady of Fatima came to San Giovanni Rotondo in 1959 while Padre Pio was quite ill. He cried out to her as it departed, pleading with the Blessed Virgin Mary not to leave him. The helicopter is said to have circled the building three times. The pilot claimed he didn't know what happened. Following that mysterious flight, Pio cried out that he had been healed.

Saints can be immense comfort in hard times. I have found them so. What is happening when a holy man leaves the scent of roses behind him? It must be grace.

Posted by Writer in Residence at 2:28 PM